In this module, I have also learned the ways of leading people. The different theories that can be used for writing critical reflection was also taught in the module and will discuss in this report such as Gibb’s cycle. This report will also shed light on the leader style which I am using presently along with the kind of leader I will become in future.

This report also reflects my learning from the activities of module and the weakness in my skill which prohibits my ability of performing certain activities. In this critical reflection, I will focus on discussing my strength and weakness along with the learning of skills that were require in making decision and solving problem in the module.

As per Horton-Deutsch and Sherwood, (2017), reflective writing is recapturing the experience of oneself, thinking about it, mulling over it and then evaluating it. The process of evaluation involves re-examination of one’s experience in the shed of intent and prevailing knowledge. The Boud’s triangular representation mode is the simplest wat of reflective writing (Gibson, et al., 2017). The only disadvantage of this model is it cannot provide guidance to the learners about the ways by which they can use their learning into experiences. 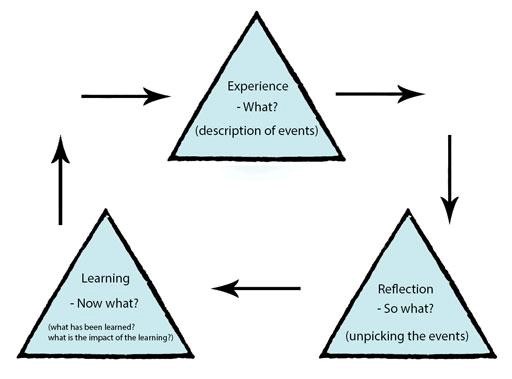 If I use this model for reflecting my learning than following is my reflection:

The reflective cycle of Gibb’s was founded in 1988 by Graham Gibbs for providing edifice to learn from the experiences (Wilson and Miller, 2018). It provides framework for evaluating experiences and the cyclic nature of it is suitable for the repeated experiences. The reflective writing with Gibbs cycle involves 6 stages that are description, feeling, evaluation, analysis, conclusion and action plan. 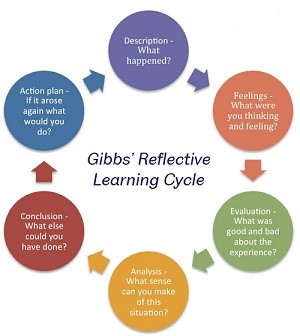 If I use this model for reflecting my experience in the activities of module then I can say that the outcome of the activity was nor very effective for me.

The application of Gibb’s cycle for my experience is:

3. Cyclic model of Atkins and Murphy

The cyclic model of Atkins and Murphy is a model of reflective practice in which an individual sojourn and think regarding the experience, analyse consciously about the decision-making skills and relate it with the experience (Marshall, 2019). Unlike the Gibb’s model, it provides a profound level of reflection and helps in avoiding the superficial response by identifying assumptions and challenges, exploring alternatives and evaluating impact.

This model has five stages that awareness, description of situation, analysis of knowledge and feeling, evaluation of relevance of identity, learning and knowledge (Fook, 2018). The first stage is awareness in which an individual elaborates the discomfort from the experience. The next stage is description of situation which involves feelings, features and thoughts. The third stage is analysis of the feeling in which the individual identifies the postulation and encounters (Porntaweekul, et al., 2016). 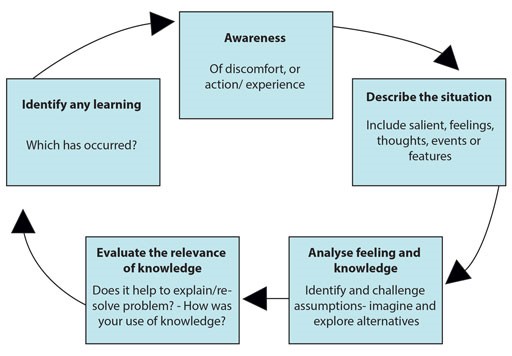 If I use the cyclic model of Atkins and Murphy for reflecting the same situation which I have reflected by applying Gibb’s model then I can say that the main cause of my discomfort in the team is the presence of the more knowledgeable members in team.

I have also realised that I do not possess any of the skills that are required to become democratic leader. Though I have effective problem-solving ability as I was able to eliminate the conflict within the team. In any team, the leader is not only responsible for leading team but also responsible for managing and eliminating conflicts in the team (Puni, et al., 2016). Therefore, beside of any style of leadership, the problem-solving ability is very important for a leader.

My reflection on the experience of working as a team leader on the assignment of tourism shows that beside of skills of problem solving, I do not have prime qualities that are required for being a leader. The emotional intelligence is one of such ability which I need to develop for being a leader. The emotional intelligence enables an individual to make decision without getting influence from stress, joy, depression, anger or sadness (Petrides, et al., 2016).

My lack of emotional intelligence is the one of the reason dur to which I felt insecure about my leadership. Hence, I need to develop some skills of leadership so that I can act effectively in the similar situation in future.

I will learn these skills by following way:

The main cause due to which I chose to use democratic leadership style in future is by observing the change in behaviour of the team members towards me and towards the other members who use democratic style. After this incident I have also gathered knowledge about other democratic leaders such as Tommy Lasorda who is a successful coach, manager and base ball pitcher.

This report concludes that the reflective writing is an effective way of analysing the weakness and strengths in terms of knowledge and skills in an individual in the context of situation. The report has discussed three models which can be used for writing reflection. I have also used these models for reflecting the activities I have performed in the assignment. While reflecting on my experience, I have realised that I used the autocratic leadership style which helped in eliminating the conflict within the team but it is also the cause of raising conflicts in the team. While learning from this experience, I have realised that I want to practice the democratic style of leadership.

Although it has also seen from the reflection that I own very few qualities of becoming a democratic leader which is problem solving. I do not have the main qualities that are enablement of followers, participative decision making and distribution of the leadership along with emotional intelligence. Therefore, I need to develop these qualities and skills for being an effective leader in future. In this report, I have also discussed the method by which I will practice these skills in future while working in a team or as a leader. This report has also shown the example of some major personalities who has used the democratic leadership style for managing and leading their teams irrespective of their industries.