Asthma is reported by the Global Asthma Network (2014) to affect 334 million people around the world in 2014 and causes nearly 180,000 deaths every year. Nearly 20 percent of such patients are the ones who suffer from severe persistent asthma. Patients with severe uncontrolled and persistent asthma are characterized to suffer from a high risk of exacerbations occurring frequently, hospitalization and in many cases leads to death according to Peters et al. (2006).

Mepolizumab (SB-240563) is a drug which is approved for medical use in USA in 2015 by FDA for asthma treatment (Food and Drug Administration) committee under Nucala® brand. This literature review reports the recent studies conducted on the mepolizumab used in the treatment of severe refractory eosinophilic asthma and also focusses on the studies done on its potential in eliminating the use of steroids for this disease.

The different endotypes and phenotypes of asthma are identified with the causative, clinical and inflammatory factors. During the last five years new medical interventions have been identified for the targeted treatment of this disease according to the identified phenotypes. In order to select a particular treatment for the variant of asthma, it is imperative to identify the correct biomarker.

One distinct phenotype of asthma is Eosinophilic asthma which is characterized by the corticosteroid responsiveness and thickening of airway mucosal basement membrane. Severe asthma is a disease which can be controlled by the introduction of high-dose of corticosteroids along with a maintenance medication or systemic corticosteroids and this can cause adverse health impacts as per the reports of ENFUMOSA Study Group. (2003).

In the patients of eosinophilic asthma the frequent exacerbations are the cause of concern. 30 to 40% of asthma patients who suffer from severe asthma also have to undergo complex treatment which includes the use of oral glucocorticoids regularly for controlling asthma according to Heaney LG et al (2010) and Moore WC et al (2007). It has been argued by Lieberman P et al (1972) and Schacke H et al (2002) that the introduction of glucocorticoids can cause serious adverse health effects on the patients.

The eosinophilic a phenotype of asthma is not yet adequately defined however, the patient of this disease suffer from high sputum and blood eosinophils levels in spite of the treatment of high-dose of inhaled corticosteroid or systemic steroids. The Eosinophils cells play an important role in the sub-acute and acute processes which are involved in narrowing of airway and these cells are also involved in the remodeling and repair that is linked to the chronic eosinophilic inflammation.

A vital role is played by the Inter leukin (IL)-5 which is attributed to be a major cytokine in the process of production, chemotaxis and proliferation of eosinophils. Studies done recently also points out that the airway eosinophilia is relevant clinically and blocking of IL-5 at the receptor is a promising strategy in controlling this disease.

Mepolizumab was the first biological agent for the anti IL-5 which was designed and also tested in random clinical trials (also abbreviated as RCTs) on the patients of eosinophilic asthma. This drug has got approval for medical use in USA in 2015 by FDA (Food and Drug Administration) committee under Nucala® brand. Its molecular formula is N-glycosylated IgG1 kappa and is formed by the 2 light chains and it is then linked with 2 other weighted chains with disulphide bridge.

Mepolizumab is a drug which is a human monoclonal antibody and it inactivates the interleukin 5 and checks the lifecycle of eosinophils. Recent studies have also pointed out at its potential in the elimination of steroids administered to patients suffering from severe eosinophilic asthma according to Kallur et al (2017). 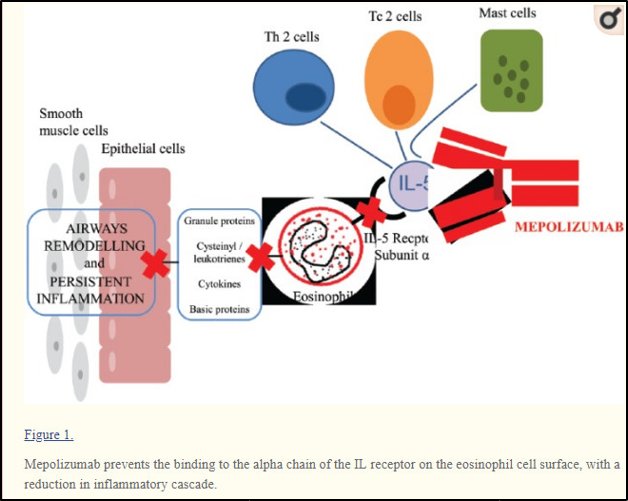 The drug links to IL-5 and this prevents the IL-5 to bind with the alpha chain present on the receptor complex of IL-5and it is located on the outer cell membrane of the eosinophils according to Clutterbuck et al (1990), Lopez et al (1988),Hart et al (2001) and Ohnishi et al (1993).

As it is reported that many patients of severe eosinophilic asthma are given regular dose of oral glucocorticoids in spite of the high-doses given in inhaled therapy which is attributed to cause adverse medical conditions for the patients in many cases. It is important to find out the potential of Mepolizumab in eliminating the use of glucocorticoids in asthma patients.

In a study done by Zia et al (1999) the pharmodynamics and pharmokinetics of this drug was examined on the cynomolgus monkeys. It was found that this drug links to IL-5 with a high coefficient of affinity and specificity. It was thus concluded that this drug can be used in diseases which show an increased eosinophils function like in asthma.

Three randomized, double blind and placebo controlled studies were undertaken for the evaluation of mepolizumab in asthma patients and these are DREAM which is a dose-ranging and exacerbation clinical trial MENSA and SIRIUS.

The Dose Ranging Efﬁcacy and Safety with Mepolizumab (DREAM) trial was conducted by Pavord et al (2012) in which 621 asthma patients were taken. This study reported that the mepolizumab was found to decrease the rate of asthma exacerbations in contrast to placebo. This drug was also found to decrease the eosinophils number in blood and sputum.

In a study conducted by the Cochrane Airways Group eight trials were taken in 1707 patients to compare the effect of mepolizumab with the placebo. However, because of the heterogeneity of the study the role of this drug was not ascertain but it was reported that it was potentially successful in reducing the exacerbations and bring about an improvement in the patients according to Powell C et al (2015).

In another study conducted by Bel, E. H., et al (2014) the effect of the drug mepolizumab on glucocorticoid was evaluated. This study is referred to as SIRIUS (SteroId ReductIon with mepolizUmab Study) and was done in phase 3, multicenter, in random manner, double-blind, placebo-controlled and with a parallel group consisting of 135 asthma patients.

Those patients were eligible for this study who were on a maintenance systemic regimen of glucocorticoid comprising of a prednisone dose equal to 5 milligrams to 35 milligrams per day for a minimum of six months before enrollment. Apart from this eligibility condition the patients also needed to have an eosinophils level of 300 cell per mcL or greater in 12 months before screening or else they had to have 150 cells/mcL in the optimization phase of the trial. All the patients needed to have a high dose of inhaled glucocorticoid therapy for maintenance and additionally a rescue inhaler therapy was also required.

Their study had trials in four phases and the first one was optimization phase in which the lowest possible dose of glucocorticoids essential for the asthma control were established. The second phase was induction phase whereby the patients were randomized in 1:1 basis and was given 100mg of mepolizumab once in every four weeks along with the dose of glucocortocids.

In this study the basic outcome was the decrease in the percent of daily dosage of oral glucocorticoid from week 20 to 24 as in comparison to the glucocorticoid dose established in the optimization phase.

It was found that there were five subclasses of reduction in the glucocorticoid dosage and these were reduction of 90% - 100%; 75% -< 90%; 50% -< 75%; reduction of more than zero -< 50% and nil reduction. It was thus concluded from this study that the administration of Mepolizumab was linked to a significant decline in the oral dose from 20 to 24 weeks. It was also found that the mepolizumab group experienced at a reduced rate of exacerbation which was 1.44 per annum contrasting to placebo which experienced the exacerbation rate of 2.12 per annum and this corresponded to a reduction rate of 32%.

In a study conducted by Prazma et al (2014) it was noted that patient dependent on the oral corticoids (OCS) shoed reduction in the rate of exacerbation and a glucocorticoid-sparing effect in both the OCS and non-OCS groups however the glucocorticoid-sparing effect of this drug in was more in the OCS group. 188 patients were selected who were enrolled in the DREAM trial for this study.

Mepolizumab and the exacerbation rate-

In a study done by Ortega et al (2014), effect of mepolizumab was studied on patients and this study was named as MENSA. This was again random, double-blind and a double dummy study where a total of 576 patients were taken suffering from recurrent asthma exacerbation and showed and evidence of eosinophilic inflammation in spite of the administration of inhaled glucocorticoids in high doses. The patients were given mepolizumab as 100 milligram subcutaneously or 75 milligram intravenously or placebo in every 4 weeks to 32 weeks.

In this study it was found that the exacerbation rate was declined by as much as 74% amongst those patients who were receiving mepolizumab intravenously while the patients receiving mepolizumab subcutaneously were found to have decrease of 53% in the exacerbation rate as in comparison to the placebo. The major difference between their study and the study done by Bel et al (2014), was that they had used the usage rate of oral glucocorticoids per day.

And it was reported that throughout the study the placebo patients received more systemic glucocorticoids and for longer duration for treating exacerbations as in comparison the group of patients receiving mepolizumab in 75milligram IV and 100milligram respectively. The patients in placebo had to take 2037 days in exposure to systemic glucocorticosteroids on contrast to 1119 and 1102 days in the patient group of receiving mepolizumab in 75mg IV and in 100mg.

Hence, this study indicated that the exposure to systemic glucocorticoids in the patient receiving mepolizumab was 41 percent less than in the placebo group again pointing out at the mepolizumab potential in eliminating the steroids for treating eosinophilic asthma. Below is the figure taken from their study which shows the reduction in systemic glucocorticosteroid for the eosinophilic asthma treatment when mepolizumab is taken.

Both the SIRUS and study done by Ortego et al (2014) reported a good safety and tolerability profiles for the drug mepolizumab with adverse effects of headache and nasopharyngitis.

Hence future research is required for finding out and assessing the long term drug efficacy in the treatment and its optimal duration for the administration and also risk encountered thereafter the drug withdrawal. The current evidence in the literature only points out the efficacy of the drug and its sparing effect for steroids however a study on a well-tolerated regimen in the eosinophilic asthma treatment is needed. Also there have been not a single study done on the hepatic and renal damage done with an interaction of the drug.