Quick Tips To Write A Manifesto Along With Example & Template

We often hear the word ‘Manifesto’ on a daily basis and generally consider it to be an aspect of some political theory. However, manifesto pertains to an open declaration by the issuer, stating his/her intentions, thoughts, ideology, ideals, which he/she may believe in strongly. It is an amalgamation of one’s personal beliefs and the ideals which one wants to adhere to in his/her life.

In this article, we will be dealing with the art of writing a strong and impeccable personal manifesto. A personal manifesto is basically a reflection of one’s character and the ideology and thought process that one possesses. It carries a person’s ulterior motives and the ways in which he/she intends to achieve them.

Manifestos help one stay focused, true to his cause and inspire to achieve the said the motives. Many of the successful people believe in the magic of having a manifesto and diligently follow it. Thus we suggest our students to also prepare a manifesto for themselves as it brings clarity and inspires one to work towards fulfilling the stated motives.

How to begin writing a manifesto?

Anything to be accomplished just requires a beginning. Start with a rock solid idea. Frame the entire manifesto in your mind first. Gather some inspiring quotes by the personalities you follow. Read some of the manifestos that might help you frame yours perfectly.

What should a manifesto strive to achieve?

The sole purpose of having a manifesto in the first place is to give your life and being some directions. It is a time tested method to keep one remain focused and inspired throughout. A manifesto aims to bring out the issuer’s intentions, beliefs, ideals, thought process and put it across to the reader.

One should try and start the manifesto by including points like:

After dealing with the above mention points, the writer could then move to more specific points about one’s attitude in general and towards life. You may want to include the following points:

General Things to Remember while Writing a Manifesto

Most importantly, remember it is not a task to write a manifesto, it should bring your real self out. It is a reflection to your personality and thought process. Being true to the manifesto is one crucial aspect of writing it. Always remember, person reading the manifesto would judge your personality based on it. Do not think about being judged about having a bad or good character, the underlying important thing here is that you remain true to what you have written and you deeply believe in it.

Keep the language of the manifesto strong. Use strong statements to emphasize on the points you are making. Use inspirational and relevant quotes. Own your manifesto. Design it as per your wishes. There is not set length prescribes for a manifesto, It can be really short or huge, depends on what you want to say.

Some of the quotes that could be used are:

“I don’t think much of a man who is not wiser today than he was yesterday” ? Abraham Lincoln

“I’m continually trying to make choices that put me against my own comfort zone. As long as you’re uncomfortable, it means you’re growing.” ? Ashton Kutcher

“Courage is resistance to fear, mastery of fear – not absence of fear.”  ? Mark Twain

Look out for some Inspiring Manifestos:

As mentioned above, staying true to one’s manifesto is crucial to bring out the originality but it can never harm to look out for some inspirational manifestos. Refer to good examples of some of the greatest manifestos of time. Keep your mind open for new, innovative and inspiring ideas. Observe the language used, the choice of words made to lay emphasis.

Read about successful people and observe their path to this success. Try and inculcate those habits or attitude to bring changes to yourself. Include some anecdotes from peoples’ lives that might inspire you.

Some examples have been shared with you to give you a brief idea about a manifesto. Refer to them and bring out the original manifesto bearing your own reflection. 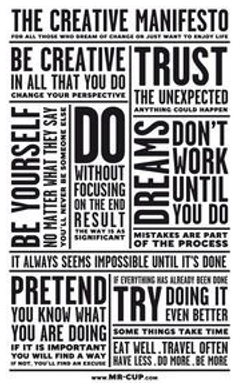 The above example is just to give you how you can play with words. Say maximum with minimum words. Own your manifesto. Colour it in your own personality. Try and be persuasive and impactful.

The University Of Warwick

5 Mistakes to Avoid While Preparing for Your Exams