While writing an academic essay, there should be smooth transitions between all the paragraphs. During your writing, you are able to see all the connections in your own writing because you are deeply thinking about your topic or essay, so it will be easier for you to see the connections.

But your readers may not always be able to see those connections. That is why most writers fail to use effective transitions. Good transition makes your reader see the connections between your ideas and thoughts, as connections should always be clear for clear writing. If you want to be a good writer, make sure your reader understands the thing that you have already said and is able to relate it to what you are saying. 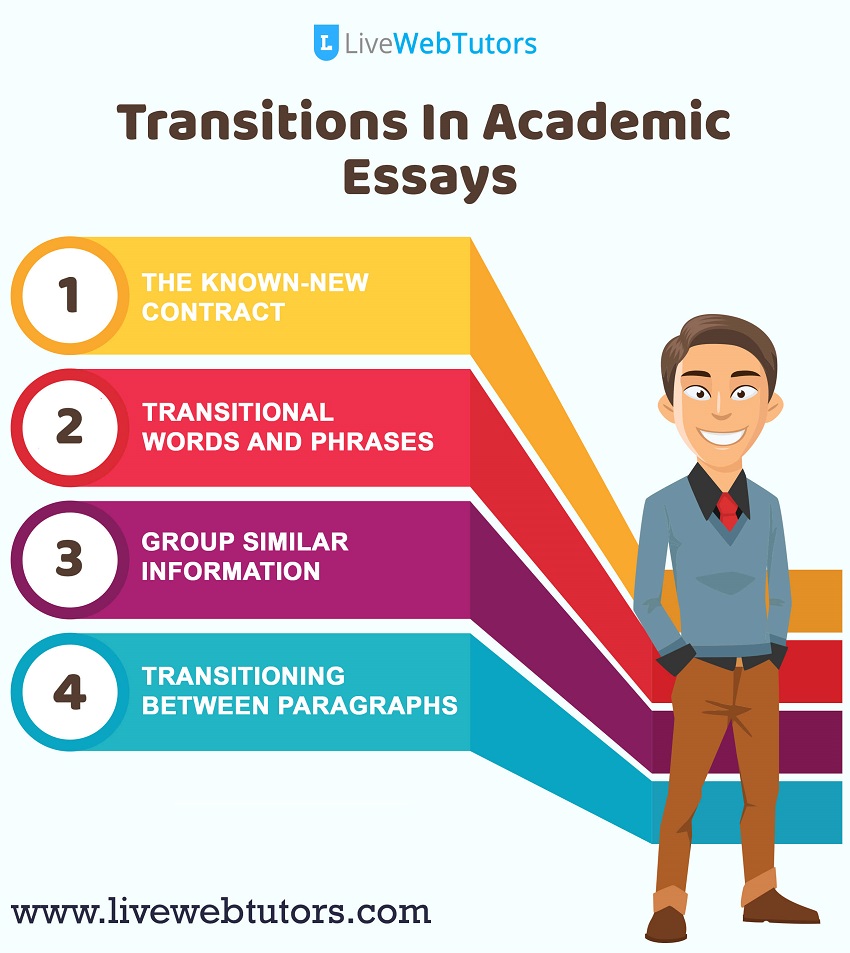 You should help them in understanding the logic of the relationship between them.

You need to consider the order of information that you give in a sentence.

There are three rules which you can think of as the contract, such as:

Using this practice the reader will be able to approach each new thought in a different way, and in each sentence, the reader will easily integrate both old and new information together.

You should group all similar information into one place so that you need not tell about the changes in your topic every time using good transitions. Just say it in the right way, and then proceed on writing.

While writing a paragraph transition, you need to focus on some points:

Here we talked about the transitional words and phrases, but sometimes you will require using a full sentence for making your transition. Also when you are working on your master’s thesis, good transitions to your whole paragraphs are sometimes required. You should remember that while you are writing your academic essay, you always need to be as concise and clear as you can. If you are unable to transition clearly using a word, then you should use a phrase instead and if you can’t do it clearly with a phrase, then go for a sentence. If you are unable to do it in a sentence, go on using more.

So next time when you write your academic essay, make sure that you have used good and effective transitions between body paragraphs and sentences to make your readers understand the logic of this relationship.

I definitely feel one with the expert team of writers who make the best of their effort to offer enriching assignments.

They offer varied value-based academic services which are definitely praiseworthy and help you gain the added advantage over others.

They have a few introductory offers available on their website from time to time, which is extremely exciting to get your hands on.

They write such catchy introductions that make way for an impressive assignment, helping you to grab high academic grades.

View All Reviews
Welcome to Live Chat
Julie
Support Agent
Hello, submit your assignment now to experience the premium writing services. Guaranteed higher grades.
Welcome to our LiveChat! Please fill in the form below before starting the chat.
Chat now