Present study is aimed to test whether daily exercise enhance the memory in people with moderate dementia. For this study patients have been chosen randomly and out of total sample 20 has undergone half an hour of supervised treadmill waling at the university on daily basis for a month. 20 people out of sample were asked to visit the university and have conversation with the researcher for half an hour each day for a month. All the relevant data related to the memory has been stored by the researcher before the treatment period, during the test and at the end of the treatment. Each participant had scope to achieve highest marks of 100 and researcher scored them as per the memory test after the complete test. Considering the achieved marks statistical analysis has been done and outcome has been presented below.

For the present study, two way mixed Anova method has been utilised because there were two independent variable. As per the stored data, time points and exercise levels were the two independent variables. Besides this time has been considered as a variable for the study and it is repeated measure that means participants in all three conditions of the Anova test were dependent. Other four conditions of the Anova were independent measures where different participants were contested under different conditions.

The analysis has been done meeting all the assumptions for the two way mixed anova. As per the first assumption of two way mixed Anova method, dependent variable should be measured at a continuous level. As per the present case, dependent variable (Memory), has been set to continuous level so as to meet the first assumption. Second assumption of the two way mixed Anova method depicts that within subject factors, there should be at least two categorical matched groups that represent same subjects within both groups. As per the present case, there were two categorical variable that makes the test justified with second assumption as well.

Thirdly two way mixed Anova method need to have at least two independent groups between subjects factor independent variable. As per the group distribution it can be seen that there has been no significant outlier within the chosen data set apart from one participant within the exercise group. Moreover, significant outlier should not be present within the dataset. Thus, outlier has been removed and not considered for the test (Kuznetsova et al. 2015).

As per the multivariate test it can be seen that health group has showcased significant outcome with degrees of freedom 2. F Value was high and makes the test aligned with the assumption 5 that argues dependent variable should normally distributed (Parnaudeau et al. 2015).

Homogeneity of variance for each combination of the groups of factors are mandatory for the at least two independent groups. Tests within the subject effect showcase that F value for each health group was high enough and sphericity was justified as the two way mixed anova analysis..

This section of the analysis showcase the within subject effect where the significance of the groups were valid to make the assumption that exercise enhance memory power of the people with slight dementia.

Within subject contrasts showcase sum of square for the health and health group are good enough to make the chosen mode demonstrate as a good fit model. As the type III sum of squares are much higher and distributed uniformly within the subject they are significant to showcase the model it good fit (Vardigan et al. 2015).

Estimated marginal means demonstrate health status was better for the group who performed exercise compared to the other who performed conversation with the researcher. 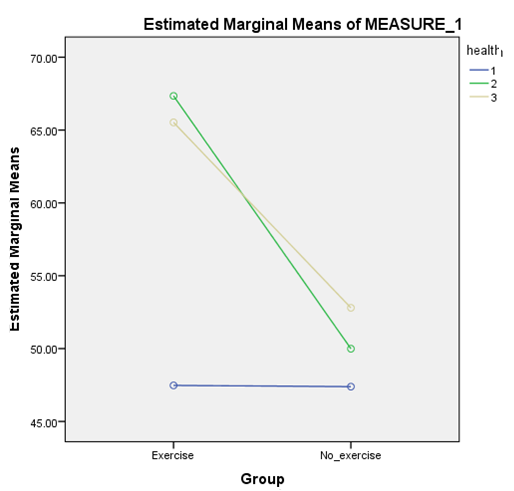 As per the estimated marginal measure variances of the differences between the groups of the between subject factor can be observed. It showcase that people who performed exercise had better mental condition compared to the other.

Leverage was checked using the calculation as follows:

From the above analysis it can be seen that physical exercise has enhanced the memory of the participants by a large extent compared to the people who belonged to the non-exercise group. In certain cases as per the test it can be observed that during the mid-weeks participants scored better than the end result who were in exercise group and reverse can be observed in case of no exercise group. Thus, it can be entailed as per the test that prolonged exercise enhance the memory, however, that do not last for long time. On the other hand, if exercise is not performed and only conversation therapy is utilised for the people with light dementia, it could enhance the memory marginally. All the conditions for the Anova test has been met and it also showcase that data collected by the researcher were justified.