The Beijing National Stadium, also known as "Bird's Nest," is a landmark building in China that held the 2008 Olympics and summer Paralympics respectively. The net volume of the stadium is 3 million cubic meters and is famous as the most massive enclosed space in the world. It is the biggest steel structure in the world that used 26km unwrapped steel for the respective construction (Gu and Zhang, 2015).

The innovation was planned and designed by Arup sport, the Architectural Design & research group, and Herzog & De Meuron Architekten. The increase in the competition in global design has influenced the design team to think outside of the box and came out with the innovation that becomes a famous landmark in the world. The design team took the inspiration from nature, to maintain their cultural aspects and implemented the respective idea for the making of such a remarkable structure. The paper discusses the factors that were essential for the design and construction management team for the completion of the respective projects in the country.

The preliminary and the detailed design highlight the use of essential resources and material handling process that includes a process flowchart for better understanding (Zhao et al., 2017). The issues regarding the construction process in the respective region have been described evidently, and the respective methods to solve the issues have also been highlighted accordingly. The paper will provide necessary information regarding the construction of the mega-structure that would influence the emerging engineers in the world to contribute to the technological development in the world.

Initially the stadium was designed to facilitate 80,000 spectators, but later on, the capacity was increased to 91.000 where 11,000 seats were placed on the top floor (Liu, Wang and Chen, 2015). It is also calculated that 17,000 workers using 44,000 tons of steel completed the construction of the stadium (Birchall, 2015). There are some facts that make the design structure of the stadium unique.

The preliminary design includes the estimation of material requirements and design prototype. The design team made the structure of the stadium on the CAD system to know the variables and requirements for the project (Lagaros, 2014). The main inspiration of the design came from Chinese art form that is the Crackle Glazed Pottery, which local and famous in Beijing (Brown and Huang, 2015).

The stadium is a symbol of modern architecture that is made inside out like all modern stadiums (Liu, Wang and Chen, 2015). The team was concerned about the geotechnical condition at the site of construction because of rapid seismic activities (Martini, 2017). The place is well known for earthquakes, which was a challenge for the design team. It is a crucial problem for the team to design a structure that can hold up to 8.0 magnitude of an earthquake (Gu and Zhang, 2015). 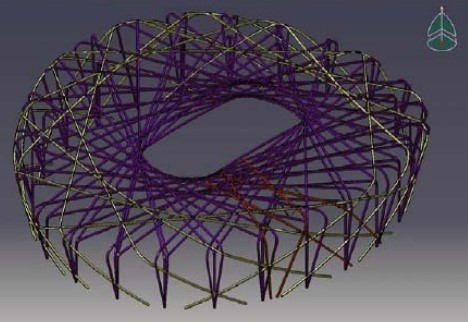 Figure 1: CAD modeling of the stadium

The main aim of the construction team is to determine the type of steel that is harder enough to bear 35x106 Pascal of stress because the construction would have 24 columns, which would be 300 meters long and should bear 11,200 tons load. Later, Wuhan Iron and Steel group has designed 2nd-grade steel that is called as Q460(Liu, Wang and Chen, 2015). The steel that was developed is likely to be highly flexible and enough to support the stadium’s shell respectively.

Another factor that the construction team was worrying about is thermal expansion effects regarding the structure of the stadium. In summers, the temperature in Beijing goes above 30°C and during winter the temperature goes below -20°C respectively (Gu and Zhang, 2015). The construction team needed more flexible material for their design that was solved by designing 2nd grade Q460 steel. The steel gives the flexibility and can be bendable wherever needed.

The detailed design of the stadium went through three different stages. Those are Operations simulation, Application of Simulation and Application of 4D CAD.

Operation simulation is a process to determine the real processes in virtual perspective that has become an efficient tool for complex construction engineering. The tool featured dynamic sequencing of resources that generates activity based cycle diagram called CYCLONE (Lin and Huang, 2016). The respective method is known as Activity Based Construction (ABC) simulation that is followed by Critical Path Method (CPM) that shows the appropriate functionally of the design.

The SDESA (Schematics for Discrete-Event Simulation Algorithm) techniques have been applied to design the required structure of the stadium that analyzes the durability and longevity of the respective complex structure.

The design results are initially drawn on a 2-D interface to describe the construction schedule using Critical Path Method (CPM). The construction managers them generates the 3-D model from 2D drawings with the help of CAD and CAM interface to determine the angular views of the respective structural design (Liu, Wang and Chen, 2015).

With the help of 3D modeling, the construction managers can generate a 4D model to determine various aspects of the structural design to determine the approximate cost analysis. The fourth dimension product model was developed to manage environment reports, budget and respective schedule of the construction.

The implementation of the designed structure in real time is quite challenging for the construction team. They had three options to start the project, which is " Overall Lifting Method," "Local-Overall Lifting Method" and "Assemble Installation Method" respectively (Gu and Zhang, 2015). The construction team decided to go for Assembly Installation Method where the material has been assembled in a small section on the ground and installed in their positions with the help of mobile cranes.

The steel structure for the stadium has 258 different assemblies where that heaviest assembly was measured around 174 ton. The installation process was separated into three different phases. 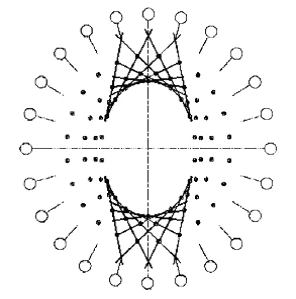 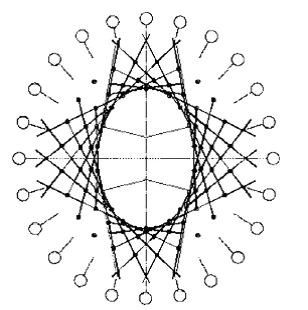 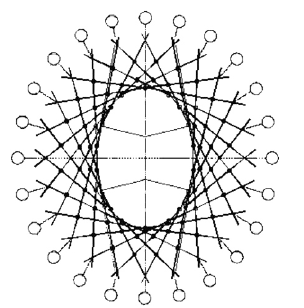 Because of the complex assembly and installation process, the construction management team developed some of the key points for the successful implementation of the assemblies (Undrill, 2015).

(a) Divide the model into three equal parts in accordance with the phases of construction.

(c) Presence of 20 assembling area in the construction site

Generating a 4D model includes the management of schedule activities, 3D CAD modeling with the help of 2D drawing and determining the relation between the 3D model and the respective activities in 4D simulation interfaces respectively (Li et al., 2016).

The structure was designed to have seven stories above and one story under the ground. Developing a 3D model from 2D drawing includes cross-section drawing, elevation drawing and respective constructive geometry of the proposed structure. The construction management team used various software interfaces such as AutoCAD and CATIA to generate a solid structural model to evaluate the structural implementation on the ground.

The 3D structure of the building components of the megastructure has been organized and determined to generate the 4D model structure of the stadium that was aligned with WBS (Work Breakdown Structure) from CPM.

The whole factor of constructing the mega-structure was depended on the design team who were responsible for generating a suitable design that could be implemented on the ground and maintain the sustainability of the respective structure. Before the installation of assembly sections in their respective position, the design team has to determine the durability of the structure in 3D and 4D model to identify the key points that were required for the completion of the project.

The respective projects cost around £300 million and had two of the largest stakeholders for the completion of the structure (Akgün et al., 2017). Those are DOW (global leaders in the development of silicon-based sealants and adhesives) and NORA flooring system. These companies have hugely contributed to the construction process of the structure.

As far as the financial condition of the project is concerned, 42% of finance was raised through CITIC (China International Trust and Investment Corporation) and the rest 58% was funded by BMG (Beijing Municipal Government). The budgeting includes all aspects of construction and assembly processes that includes unit transportation, workforce management, and respective structural design & implementation process.

The structure was designed to withstand any weather condition where the selection of the materials has been handled carefully by the construction management team (De Wolf, 2017). They designed and developed 2nd-grade steel material that is durable and strong enough to hold the mega-structure during harsh seismic activity.

The stadium has become a remarkably famous structure in the world and has been hosting several international events under its shade. It is noted that the preliminary design of the structure has been successful in the implementation of the main structure that facilitates the economy of the country (Roberts and Fleming, 2017). The construction of the structure took lots of efforts and workforce for the completion of the respective projects. It is one of the revolutionary innovations that have been made to facilitate and influence the emerging engineering technologies in the world.

It is clear that the design structure of the stadium has satisfied the concerned stakeholders and the respective managing department of the project. The whole design of the structure is based on the culture that influenced them to make outstanding innovation in the country. The main point of concern regarding the construction if the mega-structure is that it allows green initiative through their structure where the outer concealment of the structure is filled with Ethylene Tetrafluoroethyle (ETFE) that is fluorine-based plastic (Park, 2016).

It is concluded that the construction of the National Olympic Stadium, Beijing had a great effort from various skilled engineers and worker in the country. The uniqueness in the design made the structure a famous landmark in the world where people come to the country to visit the place and to appreciate the work innovation. However, there were certain difficulties in conducting the design implementation process, the skilled members of the design and construction management team have successfully applied their inspiration through their work respectively.

It was noted that the design team had a great deal regarding the construction of 2D, 3D and 4D models of the respective project that helped them to identify the key terms, which are important for the successful construction of the mega-structure. The sequence of activities that were carried out during the project is shortened down to planning, construction execution, and control & monitoring. The whole process from designing to the implementation of project detail was included in the activity sequences respectively to differentiate each section for further evaluation.

The paper describes the preliminary design where the concept of the design proposal was highlighted and the detail of the materials that were used during the construction procedure. The detailed design information has been given in the paper that determines the use of resources and the quantity of materials during the assembly of different structural parts.